The Concert Choir is a traditional boys choir. The boys enrole in the choir at the age of 9-10, and they continue singing until the breaking of their voices.

The choir has a broad repertoire, that focuses on danish classics mixed with exciting and beautiful foreign pieces. The Concert Choir performs various concerts throughout the year, at privat arrangements as well as public concerts.

Every summer the choir travels abroad for the yearly summer tour, which has brought the boys to countries as China, the Faroe Islands, Greece and Russia to mention a few.

Since 1983 The Danish Boys Choir has been cooperating with The Royal Theatre. Hence the boys from The Concert Choir often perform at opera productions at The Royal Theatre. Approximately 1500 choir boys have participated in about 1000 performances since the beginning of this collaboration.

The Concert Choir is conducted by Emil Ritter and rehearses twice a week.
The membership fee consists of DKK 2.400,- yearly, which is divided in 3 rates of DKK 800,-

If your son wishes to enrole in The Concert Choir – please contact producer Therese Fabricius at tf@detdanskedrengekor.dk to plan an audition. 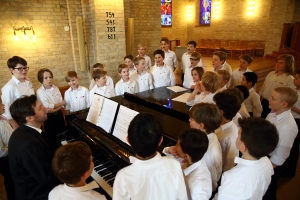